I have some additional information concerning the arrival of a clan of Salor in the area of Bergama in the mid 18th century who subsequently killed the inhabitants of Soma and settled in their place. This aligns well with the defeat of the Salor at Khiva by the Yomud in 1747 or thereabouts. Let me add that the Salor were aligned with the Tekke during the first half of the 18th century so it stands to reason that some of these migrant Turkomen in 18th century Anatolia were actually Tekke. I have personally studied two weavings with Turkoman designs from the Bergama area. The first one pictured below is from Soma and the second one is from Yahyali. 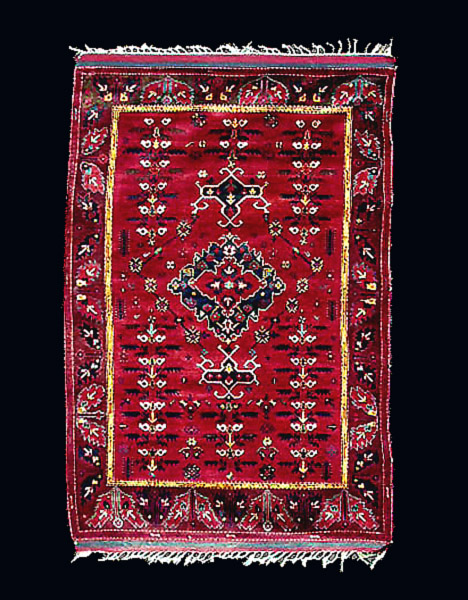 These two rugs were kept as heirlooms and are old enough to show their Turkoman heritage. The Soma Bergama rug shows definite traces of nomadic Turkoman iconography. The Yahyali rug’s design seems to be an obvious magnification of an early Salor design. Both pieces are mostly woven with hues of red and blue. Considering the probable rate of assimilation of Salor weavers and designs into the rug weaving economics of Anatolia, how long do you think it took for the transplanted Salor weavers to adjust their designs to maximize profits? Remember rug weaving was just about all the Salor people could initially do to raise money for necessities. Robbing, raping, and pillaging had little appeal for Salor men without a familiar close at hand desert to get lost in. The soma Bergama shown above has a number of clearly identifiable Turkoman iconographic designs and many more designs inspired by older Turkoman archetypes. The overall theme of the Soma rug’s design seems to be influenced by early Oushaq weavings. One can easily imagine the large size of Oushaq rugs influencing the Salor’s idea about what designs were popular. The Salor needed to weave saleable rugs to survive. The Salor would have associated the large size of Oushaq rugs with importance. They may well have imagined the owners of such large rugs were powerful Khans or rulers. Oushaq weavings from the mid eighteen century onward were intended for the great houses of Europe and Russia. The Yahyali rug shown above has a major border that is composed of several forms of the famous Salor 鉄 border so characteristic of their work. The dominant theme of this Yahyali rug seems to be a magnified and traditional Turkoman design. I suspect the inspiration for this Yahyali’s magnified central design is none other than the classic Salor kochak border. It is well known that many 18th century Anatolian weavings were predominantly dyed with indigo and madder. The Salor used Indian lac in most of their early weavings. This produced a red with blue undertones. How long could the Salor’s stores of lac have held out in western Anatolia? Was lac available in western Anatolia during the 18th century? Harald Bohmer says in his newest book, Koekboya, that the use of Lac completely disappeared outside of India and Indonesia after about 1800 or just after the introduction of American cochineal. “Lac is an insect based red dye. The insect dye lac was the principal red dye used in classical Persian carpets.” Whiting, Mark. HALI, Vol 1. 1978 Use of lac yields a “cool” rather than a vivid or “bright” insect red in the blue tones that we associate with cochineal. Lac is a resin secreted by the lac insect (Laccifer lacca) upon the smaller branches of trees, primarily the fig tree. Lac traditionally was raised in Northern India. Lac takes it’s name from the word for 100,000 – lahk which refers to the huge number of insects who are needed to make marketable quantities of Lac. Stick lac is when the lac is still on the branch and grain lac is when it has been crushed and washed. The dye is derived from the secretions of the lac insect (Laccifer lacca). The insect leaves a resinous coating on the branches of several trees including the soapberry, acacia and the fig tree.” The Soma Bergama piece is a brilliant bluish red. I believe it is dyed with Indian lac. This rug could conceivably date to circa 1775-1800. The Yahyali rug’s red is a vivid blood red characteristic of high quality antique madder dyes. Its design is still recognizably Turkoman inspired. I date the Yahyali rug to circa 1800-1850. Rugs like those shown here are exceedingly rare. Ms. Mallet is an accomplished dealer in fine weavings, especially kilims, and a noted author from the Atlanta area. Here’s the link to her fine comprehensive website. I am including one final image of a rug from the Vakiflar Museum in Istanbul that I identify as Bergama from the mid 18th century. Its connection to the Turkoman is more obvious. This rug is published in CARPETS TEPPICHE by Belkis Balpinar and Udo Hirsch: plate# 62. The star like motifs found “sprinkled” around in the field of this published and interesting mid 18th century rug are characteristic of a popular 18th century Bergama border. I have included an overall shot and a close-up picture of an exemplary 18th century Bergama piece to illustrate this fact. I should also mention the fact that Hirsch and Balpinar declined to specify a date for the Vakiflar rug seen here saying instead that it was “difficult to date”. I wonder if the field of the Vakiflar rug is dyed with Lac? In the central gull I see a delicate violet color that I associate with Lac dyed silk. 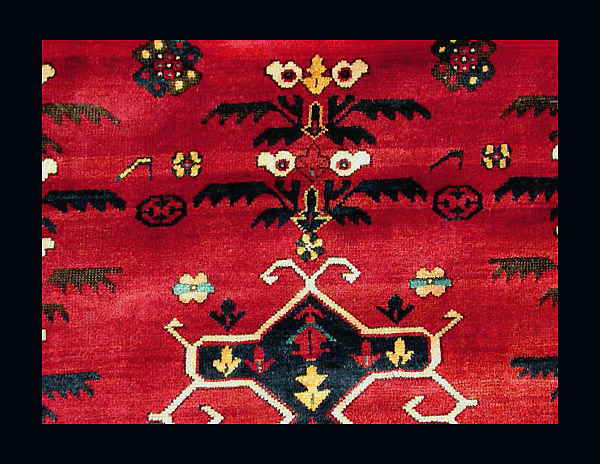 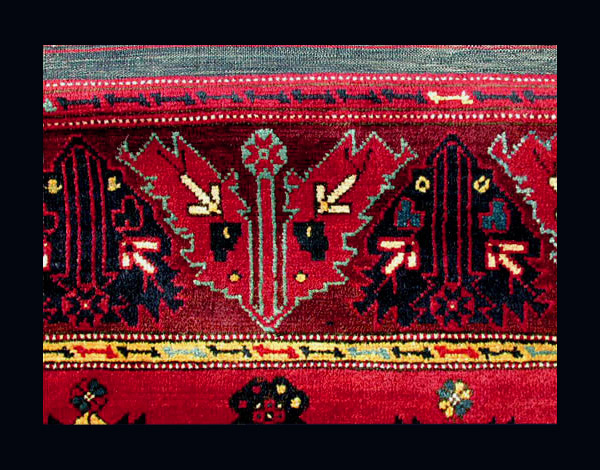 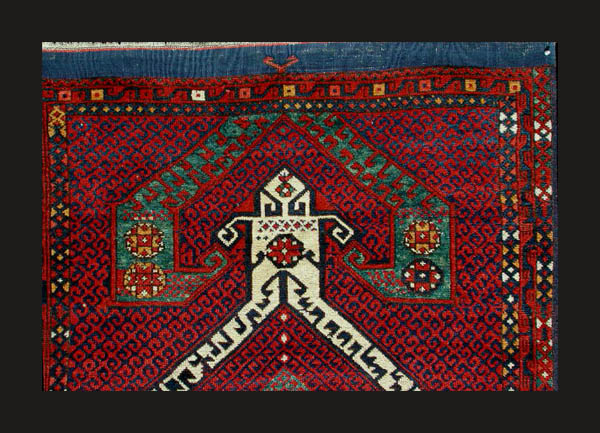 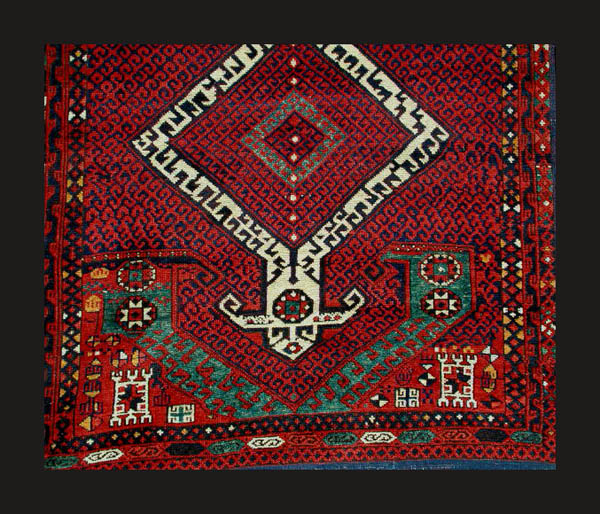 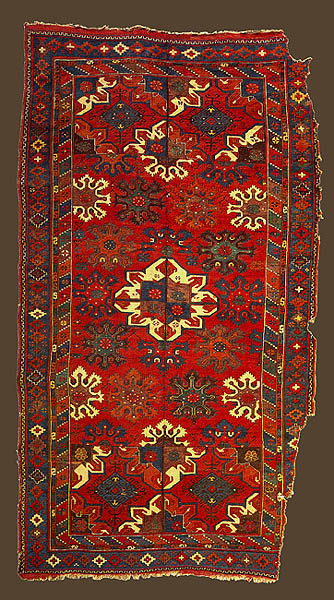 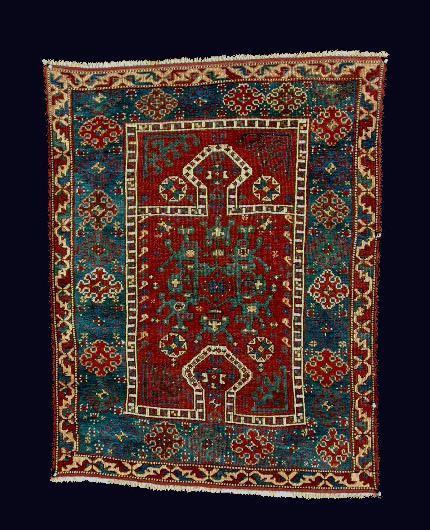 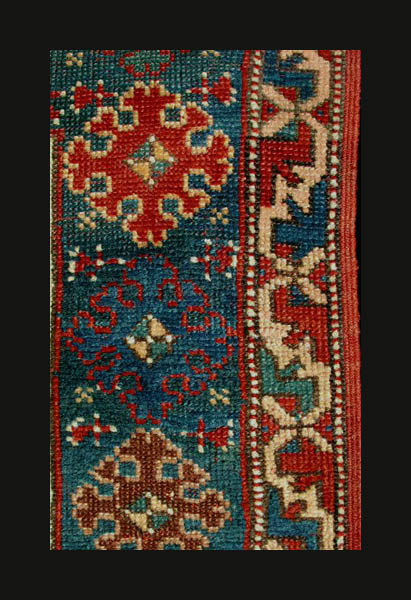