In the sixteenth century the Tekke were a minor tribe surrounded by the Sariq, the Ersari, and the Ata. All of these tribes were subject to the Dashqi Salor Confederation which is sometimes referred to as the Outer Salor. In this paper I discuss a theory concerning the fate of one prominant sixteenth century Tekke clan. 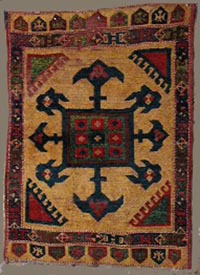 Marla Mallet wrote the following sentence at the end of her description of an antique Yahyali prayer kilim. “One note for die-hard Turkmen enthusiasts: The Yahyali area was one place supposedly settled by early Salor migrants in Anatolia. It’s not the Salor weaving you would expect, is it?!” Source of Quote

This glossary provides links to some educational information about Turkomen rugs, Anatolian rugs, and Caucasian Rugs.